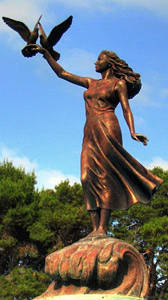 Yes, it can be dicey when talking to your kids about Judaism as a non-believing frum Jew. But sometimes I'm able to impart things which I feel particularly good about. Over this past Shabbat I had a such a moment.

We were taking a walk, and my teenage son asked me to explain the idea of the mitzvat aseh shehazman grama - usually translated as "positive time-bound commandment". I explained what it is, a mitzvah which is supposed to be performed at a specific time, and that women by and large are exempted from these mitzvot. I told him that given the domestic role to which women were routinely assigned until very recently, and the tremendous load of responsibility that went into that - especially in former times when there were no laundry machines, and you had to grow/raise a lot of your own food, weave your own clothes, etc., to obligate women to do time-dependent mitzvot would make their lives even more difficult than it already was. So Chazal (the Talmudic Sages) gave them a break - if a woman wants to do the mitzvah - great, but she's technically exempt.

He asked why it is then that men say "shelo asani isha" (the blessing of not being made a woman) if men are in a certain sense weighed down by being obligated in more mitzvot. I explained that the commentators say it's precisely for that reason that we do say "shelo asani isha", as well as "shelo asani goy" (not having been made a non-Jew) and "shelo asani aved" (not having been made a slave). Non-Jews, slaves, and women are obligated in fewer mitzvot, and Chazal wanted men to embrace their additional obligation as an opportunity for growth, rather than see it as a burden.

All standard, classical answers thus far... But then I went on to speak more personally about it. I told him that I frankly felt a bit funny, not right, about saying these brachot - at least "shelo asani isha" and "shelo asani goy". (Now I'm talking about the "content" of the brachot, mind you - I didn't get into "baruch ata HaShem" which is another issue altogether.) I said that even though there are ways of understanding these brachot positively, to the listener they have the potential to be insulting. It's like if your name was Bob, and someone next to you said the blessing "shelo asani Bob" - thank goodness I'm not Bob! Or even saying "shelo asani goy" in front of a non-Jew... I said I thought it would be a bit insulting. My son laughed - "A bit? That would be really insulting!"

A nachas moment! He really got my point. And what was my point? Basic Sensitivity. On several levels:

1. To women and non-Jews (or anyone for that matter). Even if the intention is 100% positive, if we know what we say is going to be taken otherwise, or if we'd be embarrassed to say "thank God I'm not Ploni" in front of Ploni, then we really need to think twice about saying it. That's actually my one-off lashon hara rule: If you'd feel embarrassed saying something about a person in front of them, don't say it. That's why I'm uncomfortable with these brachot.

2. To Chazal/the Mesorah (tradition). But I didn't want my son to think I meant to scorn the tradition. As much as I feel it's important to be sensitive to people about whom the brachot are said, I also want to give due honor and benefit of the doubt to Chazal, who penned these brachot. So I offered a bit of context.

Regarding "shelo asani goy", we have to remember that it was a far more brutal world back then, and the Roman Empire - which ravaged the Jewish people, enslaved us, mercilessly tortured us, destroyed our homes and cities and sent us into exile - was certainly no exception. So at that point in time, to say "shelo asani goy" would have made a lot of sense. The non-Jewish world was seen as cold-blooded and cruel, and we didn't want to be associated with that.

As far as "shelo asani isha", it's more in the sense of not being made a slave. Women at that time in history (and until very recently) were universally treated as second-class citizens. Even in the most advanced societies, women were not given anything close to what we'd call "equal rights". Some commentators on these brachot in fact point out that just as a slave has a "baal" (master), so is woman's husband called a "baal", a master. A woman used to be considered her husband's "property". So again, in this context, it would have made much more sense at that time to say "shelo asani isha" - because indeed being a woman was a very difficult lot in life, something like being born into slavery.

But there's another way to honor Chazal - to make changes where appropriate. I believe it gives no honor to Chazal to simply copy exactly what they did without question, acting essentially as robots and parrots, and effectively "freezing" Judaism like a museum piece according to the way life was 2000 years ago (or even 200 years ago). What would give Chazal honor is to think, reason, and behave according to where we are and what's appropriate today. Nowadays, when our experience with non-Jews is very often positive, and when women in free societies are treated equally before the law, these brachot come off as inappropriate and derogatory. I told my son that as sure as I am that the sun is in the sky, if Chazal were here today, there is no way they would have us say these brachot.

(Of course they arguably wouldn't have us say any brachot - because addressing and giving praise to a deity is well beneath our dignity as a reasoned people in the 21st Century. But that's another story.)

3. To the Kehilla (congregation). I also explained to my son that at the same time, I wouldn't hesitate to say these brachot when davening from the amud (leading the service). Sometimes it's important to be sensitive to where people are at, even if you don't agree with them. There's a place to disagree as a yachid (individual) and agree as a tzibur (community) for the sake of shalom. That said, there's also a place to respectfully disagree in the community context as well, so if I were davening I might have someone else say these brachot. No judgment against people, no making a fuss about it - just to gently and respectfully stand on principle if I feel it's truly important.

That's basically what I gave over. We had a good walk together, and it served as a chizuk (reinforcement) to me that if we try to be sensitive and reasonable, what appears to be a "paradox" of being a practicing non-believer is not only doable, but in fact also has the capacity to do a lot of good. True, I didn't "lay it all out there" from an atheistic point of view, but again it's about sensitivity - wanting to be sensitive to my son, to impart to him some of my thinking bit by bit, over time, and let him reach his own conclusions.