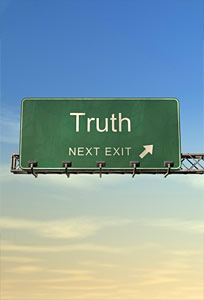 First, a quick aside about the word emet. Emet is linguistically related to emunah, "faith". That is, emet does not mean "truth" in the sense of "ultimate truth". What it means is being "true to" someone or something, being faithful. Something is referred to as "emet" when it can be counted on to follow through, when it's reliable, trustworthy. A witness' words are "emet" when they are "true to" or faithful to what actually took place. The Torah uses the phrase "chesed ve'emet" in the context of brit, to imply doing kindness and being true to one's word.

I bring this up because the phrase "torat emet" is usually taken to mean that Torah = truth, in the "ultimate" or cosmic sense. So the more Torah we learn, the more we connect to ultimate truth. But this is not the meaning of the phrase. More accurately, torat emet means that Torah is true to its word, faithful, and therefore something we can rely upon. Now, whether or not that's "true" is something we can debate, but at least we should understand the terminology correctly, to know what the phrase means and what claim is being made.

Clearly, the Torah understands that being true to one's word is a value of highest import. To promise something and then not deliver is a blight on a person's good name. To make good on one's promises is the mark of emet. However, I don't want to completely discount the more colloquial meaning that emet has come to imply, meaning "truth" itself, as in "conformity with fact or reality". What would it mean to say that Torah conforms with fact or reality? That the world was created in six days? That Adam was formed out of dust and brought to life with the breath of God? That the Sea of Reeds split? That God said to Moshe [anything]? That X, Y, Z stories in the Chumash are "facts" in the sense of real events which happened? Someone who thinks reasonably and objectively will certainly conclude quite the opposite: If that's what's being touted as "emet", then what we have is a "torat sheker" - it's simply a lie.

Now, I admit that many (most?) frum Jews have this conception of torat emet, and that they vigilantly maintain that everything in Torah is factually true, against evidence and against reasonability. I also understand why they do it - because it's considered sacrilege to say otherwise, because everyone else around them thinks that way and we're affected by our surroundings, because they've been educated that way from early on, and because once a person accepts other "magical" beliefs, to claim that the Torah is historically or factually true is not that big of a stretch anymore.

How do I personally understand torat emet? I'll say this: To call superstition, myth and metaphysics "emet" in the sense of conforming to reality, is a farce and makes a mockery of emet. But even the "softer" definition of "torat emet" - that Torah is faithful and reliable - I can't fully abide by. While I like try to give Torah credit for being remarkably relevant, usable and applicable, even 3300 (or whatever) years later, I don't believe for example that if I love Hashem with all my heart, and follow the commandments, that there will be rain in its proper time, etc. While I see the depth and beauty in Judaism, I look around and see very religious Jews, and I don't particularly see that piety translating into greatness. Of course there are great ones out there, but I'm saying that I don't see Torah as being entirely true to its word, that by keeping the mitzvot we necessarily have blessings rain down on us. Now in fairness to Torah, it could be like the first chapter of Yeshayahu, where he rails against Bnai Yisrael for being "pious" where it comes to Sabbath, festivals, sacrifices, etc., but that all these are meaningless - detestable in fact - when the people don't act in accordance with justice, kindness, compassion, etc. So perhaps that's what's going on. Maybe if we acted decently AND kept the mitzvot, we'd see the the blessings promised by the Torah fulfilled in spades. "Maybe", but as a person of reason, I don't believe in that.

So in essence, I'm left making my own construction of the term torat emet. And I feel comfortable doing that. If Torah is not a product God, but really a product of human beings and a package of teachings/directives for Bnai Yisrael, then as a human being and a Jew, I am absolutely unapologetic about making Torah "in my own image" when necessary. I don't want to be one of those who disingenuously "fudge" and claim that "their" Torah is really the one given to Moses (or whoever) umpteen years ago. No, Moshe had his Torah. Chazal had their Torah. And we must have ours. Torah is "instruction", and that instruction must be relevant to us, or else it is simply an Ancient Near Eastern Text that we've held onto as a national "transitional object" for way too long.

How do I reconstruct the term "torat emet"? I say that Torah (again, my Torah) can only accord with truth. It cannot contravene fact or reality. Therefore Torah must make no claims on any of its own content as being "true" historically. It is likely some mixture of history with a generous helping of myth, and we will probably never know the exact proportions of this recipe. Torah must repudiate any of its own claims of blessing and curse connected to mitzvot observance which assume metaphysical realities. (There are some aspects of blessing/curse which can be understood as natural consequences, in terms of reaping what you sow - but that's within reason.) Torah must reject those laws and teachings which are immoral in our day (and thus untrue in the sense of being "unfaithful" to our needs and our conscience). And it goes without saying that it has to unequivocally deny the existence of gods or God as depicted in the Torah - speaking to people, performing miracles, smiting sinners and enemies, etc. To frame it in the positive, Torah would say that truth and faithfulness are key - and therefore you don't say something that's false (let alone tout it as "emet"), and you don't make promises you can't keep.

In short, torat emet means that Torah puts such a great value on truth, that it is ready and willing to reject anything which falls short of the truth - meaning it is ready to reject parts of itself.