Tearing Up the New Testament 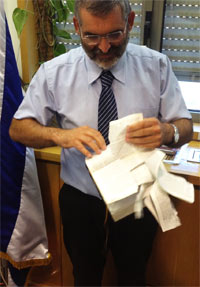 Minister of Knesset Michael Ben-Ari caused an uproar this week when he publicly tore out and trashed pages of the New Testament in a Bible sent to him (and to all MKs) by Victor Kalisher of The Bible Society, a Messianic Jewish organization (i.e. Jews for Jesus). Two brief points I'd like to make on this:

1) I'm far more concerned about the "messianic Judaism" of Ben-Ari than I am about the group who sent out the Bibles. Let me put it this way - in the continuum of beliefs (from better to worse, in my opinion), we have:

Jews for Jesus are in the "b" category, as are most decent, moderate religious folks. But Jews like Ben-Ari earn a solid "d". Yes, sending the New Testament to Jewish MKs is provocative in its own right, but that is altogether different than reacting by publicly antagonizing 2 billion Christians by destroying their holy book on camera, inside a Knesset office with the Israeli flag in the background - and in so doing unilaterally damaging Israel's relationship with the Christian world.

I'm all for standing up for what's right even when it's unpopular, and occasionally being a bit radical if that's necessary to get things done (by writing a blog like this, I guess that's obvious!), but the priority always has to be people over ideology. And that requires the ability to be pragmatic and flexible, to work with people, to compromise, and seek out live-and-let-live solutions. By deliberately alienating, provoking and essentially "flipping the bird" to the entire Christian world in order to show everyone what he thinks of the New Testament and attempts to proselytize to Jews, Ben-Ari has proven himself to be ideologically narcissistic, a "kanai" (zealot), a loose canon who has no business holding public office or representing the State of Israel. He's lucky it was a New Testament, since Christians are by and large civilized folks who don't take to the streets in a frenzied rage whenever a stupid stunt like this gets pulled.

2) I also want to mention this article from yesterday's Jerusalem Post: Christian MK calls for legal action against Ben-Ari. What I find particularly unfortunate about this is, assuming any legal action is warranted here, why should it be that a "Christian MK" is the one who has to call for it? Is what Ben-Ari did a "Christian" problem, because it was an affront to Christians? Or is it something we all need to be concerned with and do something about? Jews generally have a good track record for defending the rights of others, standing up against tyranny, injustice and intolerance, even when it doesn't impact us directly. But in this case, out of 120 MKs, it's the one Christian who has to take the lead on this. I find that highly disappointing and frankly embarrassing given the fact that this is not simply a case of "the other guy" being intolerant - it's Jewish intolerance, of a highly charged religious variety.

Jews, and especially Jewish elected officials in Israel, need to stand up in defense of Israel's Christian minority, in the same way we'd want Christians to stand up in the 99% of other places in the world in defense of the Jewish minority (which for instance would have been appreciated in the recent ban on circumcision in Cologne, Germany). Because that, my friends, is how we're going to survive and thrive in this world. Decent, benevolent, good-willed people need to have each other's backs. We need to be willing to fight the other guy's fight, when that fight is righteous, as if it's our own. The same goes for the Israeli-Palestinian issue. The only way this situation is going to resolve positively and peaceably (again, in stark contrast to MK Ben-Ari's "Kach" approach) is for both peoples to adopt a "got your back" mentality. But that's another story for another time...