Saying "Merry Christmas" without the Neurosis 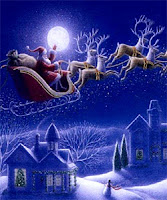 I used to wish my Christian friends a very reluctant "Happy Holiday" when Christmas rolled around, feeling like saying the word "Christmas" meant acknowledging and giving honor to the birth of "that man", whom they erroneously call the "Christ/Messiah", giving tacit support to avoda zara, the belief in a "man-god". It's the same reason I used to feel my skin crawl if I somehow found myself stuck inside a Reform shul during services - that I was betraying Torah, giving my unspoken approval to foreign and wrongheaded practices.

But today I gladly, without any hesitation whatsoever, extended a warm "Merry Christmas" to a Christian friend of mine. Of course I reject the "man-god" concept as ridiculous. But I acknowledge that holidays for most people have very little to do with the theological/conceptual package, and everything to do with family, memories, songs, traditions, food, joy, more down-to-earth concepts like "goodwill towards men". Holidays are packed with meaning and personal/family significance - THAT is what I honor when saying "Merry Christmas". I honor the person by acknowledging what is deeply significant to him (in this case a "him"). Just like he'll wish me a "Good Shabbos" even though he doesn't believe in a literal seven-day Creation (and even though as a non-Jew he's "chayav mita" if he keeps Shabbat) - because he knows that Shabbat as Jews experience it has nothing to do with all that.

So ok, if I can take Judaism's craziness with enough of a grain of salt to actually devote a huge part of my life to religious observance and Torah learning, then I can take Christianity's craziness with enough grain of salt to wish a good friend a "Merry Christmas" - that is, providing I also get to wish a hearty "Mazel Tov" on the bris come January 1.