Women's Participation in Shul: A Reaction 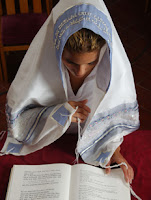 A few weeks back, Rabbi Zev Farber of Atlanta wrote an article on Women's Participation in Ritual. Here's how I'd sum up his basic thesis:

We need a paradigm shift regarding women's participation in shul rituals, so that instead of non-participation being the default, participation is the default. The need arises because:
I first heard about R. Farber's article in a post from blogger Garnel Ironheart, When Only the Mechitza Is Left, which offers a critique on the article. I'd like to address his post because I think he presents an argument that many frum Jews resonate with. Here's how I'd summarize Garnel's argument against the "paradigm shift" proposed:
Here's where I agree with Garnel: I don't think there is necessarily a problem. I think he's right that liberal values play a strong role. And I also think he's right in terms of the overall priorities of Judaism.

Now let me explain what I mean and where I disagree.

When I say it's not "necessarily" a problem, I mean that R. Farber's article is effectively a condemnation of the status quo. So when frum people out there living happy, meaningful lives read the article, many may feel as if they're being attacked as doing something wrong - conducting themselves in a way that's oppressive and antiquated. And not only doesn't it match their experience - it's insulting. And it's intrusive - they feel like "discontent" and the "need for change" are being foisted upon them against their will. Frum women generally don't want to participate in shul, and they're more than happy to let the men do their thing, while they do theirs. To the overwhelming majority of the Orthodox world, there is no problem. It's the proposed "paradigm shift" which is the problem.

(Mind you, I'm talking about shul participation. Things like the aguna issue, problems with husbands not giving gets, etc. are inequalities that I think a wider swath of Orthodox women are not happy about and would like to see change.)

However... Clearly there's a minority of women, particularly in left-wing Modern Orthodox circles, who aren't happy with the status quo in shul. They want to read from the Torah, go up for alliyot, lead parts of the tefilah - basically be counted as an equal part of the minyan to the extent possible. Some may only want to do that within the confines of normative Halacha, and others may want to see the Halacha change, or simply be bypassed. And yes, I think there's little doubt that part of what fuels that discontent is the influence of living in a free society where women have equal rights before the law, and where a person's gender doesn't determine whether they have something valuable to contribute in the public sphere. And this reality wasn't always the case, to put it mildly. Up until only very recently, it was a man's world. Laws regarding women and property ownership, marriage and divorce, access to birth control, equal pay, voting, holding public office - all of these were issues that women had to fight for. It may all seem like a vague memory now, but the world was very different in this regard only a few generations ago. And we consider it a bracha and a considerable upgrade to society that these changes have been enacted, not because we want "sameness" or to blur male-female distinctions, but because we consider it a more elevated, enlightened society where women's lives are not controlled by men, and where we judge a person's ability to participate and lead based on their capability, talent and desire, and not on their gender.

So naturally there are Jews who look at traditional Judaism, where women are not equal in Jewish law, and where women's leadership/participation in the public sphere is not welcomed, and they find this highly disconcerting (even if inequality doesn't mean "inferiority", which itself is debatable). Here they look to Judaism as a source of spiritual inspiration, and yet Judaism seems to be behind secular society in a very significant and tangible way. This fact weighs on some people's minds like a heavy cloud, and it disturbs their ability to derive full enjoyment and meaning from Jewish life. That goes for women who want to participate in shul, and yes, even for those who don't want to come to shul - it bothers them deeply. Just like if a city had a law on the books that said no Jews were allowed in a particular park - even if there wasn't a single Jew in the city who ever wanted to use that park, we'd understand if they were irked by such a law and found the city a less desirable place to live. And so for this Orthodox minority, there is a significant problem with the status quo, and a paradigm shift is not just welcome - it's overdue.

So here you have two very different positions, one which doesn't want to see a change, and one that does. But the thing is this - neither one is without its reasonability! And neither one particularly wants to be judged, let alone have its interests and aspirations blocked. So I'd prescribe a very simple solution:

Let people decide for themselves.

Let there be shuls where the minhag is that women participate, and shuls where they don't. And let people be happy doing what they want to do. Don't make traditional Orthodox women feel "antiquated" and "oppressed" for watching from the sidelines in shul, and don't make women who want to be included in shul ritual feel like they're being "whiny feminists", merely wanting to imitate secular society without having any genuine spiritual motivation.

As for the argument that R. Farber's position is illegitimate because it's rooted in liberalism, I think that's the wrong approach. The point is not what "motivates" the desire to change - it's whether Halacha can accommodate it. If Halacha is flexible enough to allow for changes that make a segment of the Orthodox community feel more "at home", that comport more with their conscience and create a more enjoyable and meaningful experience, then why oppose it? To take strong opposition to something that's Halachically permissible and which would improve people's lives strikes me as a sign that one is taking their guidance not from Halacha but rather from the visceral attachment they have to a particular set of norms and taboos.

The idea of having a woman open the Ark and take out the Torah is something that strikes 99% of Orthodox practitioners as deeply wrong. And it's not because they can quote siman/se'if in the Shulchan Aruch. The reaction has nothing to do with Halacha. It's just somehow... wrong, unnatural, bizarre, out of place. Well, that is what we call a "taboo". It's an emotional gut reaction based on something we're not used to experiencing. And that is every bit as "non-Halachic" an influence on what we do or don't do as liberalism or feminism, or any "ism". But... I would also say that it's a legitimate reason to do something or not to do something in Jewish practice. There's no "mitzvah" to make every person in shul cringe just because something is permitted in Halacha. In fact there's a mitzvah against causing that kind of discomfort. It's called ona'at devarim, not saying or doing something which causes another person to suffer emotionally. Which is what would happen in 99% of shuls if a woman came up and took out the Torah. People would be upset. I'm not apologizing for it - it's just a fact, and it's something we need to be sensitive to.

That said... In a shul where that taboo doesn't exist, where the majority wouldn't cringe, and where if anything the prevailing discomfort comes from the lack of women's participation, we have a very different situation. If there's a way to arrive at a solution within Halacha* for women to participate, then gey gezunt! Let people live and be well and do their thing.

*(Now, as someone who doesn't ascribe divinity to Halacha, I'd go further and say there's no problem whatsoever with bypassing Halacha completely if it goes against our conscience. But we have to recognize that there's always a price to pay by going outside the system, so we need to think about whether it's worth it in a given situation. But for purposes of this conversation, I'm assuming the more normative Orthodox view of Halacha as sacrosanct and therefore something which most religious Jews don't want to bypass.)

So I've touched on the first two points I enumerated regarding Garnel's critique, the need for change and the question of authenticity and liberalism. About the third point, misplaced focus in Judaism, I agree that shul isn't the center of Orthodox Jewish life (even though it does have a very central communal role). And getting a kibbud in shul is certainly not the biggest "honor" to strive for as a Jew. However, I can be cognizant of these priorities and yet still appreciate an alliyah in shul. And I assume that a woman is every bit as capable of doing the same - and it doesn't mean she's misprioritizing or taking the kibbud out of proportion any more than I am. And lastly, a mussar point: It's for me to shun my own kavod (honor) if I so desire - but it's not for me to shun someone else's kavod. It's not for me to tell someone what kind of kavod they should or shouldn't seek. That goes for shul-related kavod, and it goes for men as well as women.

What's my point with all this? It's a suggestion - that we stop expending so much effort trying to delegitimize one another's practices and preferences (whether they're liberal or traditional or anything else), and simply see our main "avodah" (job) as looking out for people's happiness and well-being. If we can do that, I think we stand a much better chance at arriving at solutions that work for people, and we'll be a happier, healthier people as a result.