"Have You Checked Your Mezuzahs?" 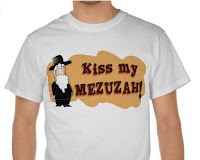 I've made a couple of trips to "Terem" (local emergency medical clinic) recently with two of my children, including last night. (Everyone's ok - just kids having normal kid-type accidents, though it doesn't make it any less traumatic when it happens!) So after a fairly long evening I get home, and a neighbor, knowing about the previous accident, asks me with grave concern: "Have you checked your mezuzahs?"

I'll tell you why the question irks me. First off, here I am coming back home from what was obviously a stressful ordeal, and now somehow I'm to blame for it, because I haven't checked all my mezuzahs recently? I know he wasn't "blaming" me - but the implication is that I'm supposed to be the one taking care of my household, yet I'm not ensuring that we have basic "spiritual protection". But the other thing I'm left shaking my head at is the belief (which is as far as I can see has become "standard" creed) that mezuzahs basically work like amulets, a form of "Torah-sanctioned" magic, whereby if the letters are written correctly, they have the capacity to protect the house and ensure that no harm comes to the family. But God help you if there's one letter that's missing, faded, smudged, etc., because now "mazikin" (demons, spiritual entities) will enter the house and unleash all manner of hellish havoc - from broken toasters and leaky pipes, to accidents, sickness, problems with "shalom bayit", you name it. Even if a person is God-fearing, davens sincerely three times a day, is meticulous in mitzvah observance, that's not enough - because if so much as one letter of your mezuzah is ill-formed, all bets are off!

This is just one of the little interactions with my religious brethren which leaves me with the sense of "What are people thinking?!" Forgetting about whether it might be a form of darchei emori (lit. "ways of the Amorites", buying into non-Jewish magic and superstition), what about basic common sense? You know, like the kind that says that "accidents happen" is a more likely (not to mention healthy) explanation
than saying little Shloimi or Rivka fell off their scooter because a demon placed stones in their path or went inside their heads and caused them to make too sharp a turn, all due to the fact that here's a scroll on the doorpost of their house that wasn't offering enough spiritual protection. Seriously? It just goes to show that intelligence is no inoculation from believing in utter nonsense and superstition.

The bitter irony is that emergency clinics all through the country are going to be filled over the next day or so with kids who've been burned or otherwise hurt as a result of Lag Ba'omer bonfire celebrations, where kids build towering infernos with little or no adult supervision, often in areas adjacent to dry brush. Every year kids end up hurt, and every year fire departments are driven nuts putting out wildfires. And why? Because of the belief in the holy power of Kabbalah/mysticism and the veneration of Rabbi Shimon Bar Yochai, who many people believe authored the Zohar (which itself is a questionable assertion). Point being, the same people who will tell you about getting your mezuzahs checked for fear of harmful demons are the same ones who let their kids run around setting massive unsupervised blazes. The message: Hashem will protect you - not if you're a decent human being, not if you practice reasonable safety measures, but if you press the right spiritual "buttons".

It's superstition run amok, a kind of religiously sanctioned mental illness. And not only is it annoying to encounter (especially when coming back from the ER), not only is it the kind of superstitious thinking not befitting of an am kadosh (holy nation), but sometimes it's just downright dangerous!

Wishing everyone a happy (and safe, and sane) Lag Ba'omer