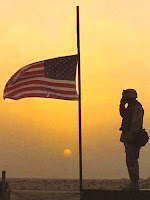 It's Memorial Day in the States. Every respectable U.S. news website - left or right-leaning, pays respects to fallen soldiers. Whether you believe lives were lost in defense of freedom or that lives were wasted because war is never the answer, still every segment of society (lunatic-fringe aside) acknowledges the appropriateness of mourning over soldiers who lost their lives. Conservative, liberal, religious, not religious, black, white or anything in between - it makes no difference.

I couldn't help but think about the contrast to Yom HaZikaron, Israel's Memorial Day, where indeed one segment of society - sizable, vocal, unified, intensely ideological - not only refuses to appreciate and express gratitude toward soldiers who've put their lives on the line in order to ensure the survival of the Jewish State, who make their life/lifestyle in Eretz Yisrael possible, but refuses to even acknowledge a day where we mourn the dead. No gratitude, no tears. They will have none of it.

Now, before writing this post, I Googled "Memorial Day protest" to see what came up. Maybe I was wrong, maybe there are masses of U.S. citizens who refuse to commemorate the day (and I mean actually oppose the day, not just barbecue). I didn't find much. There was one page which caught my eye, titled: "NAACP Protests Pause for Memorial Day," and I thought - hey, here's a major African American organization which is protesting the "pause" (as in pausing for a moment of silence) for Memorial Day. They're "anti-pause", just like the charedim in Israel. Well of course that was a completely wrong read! It meant they were pausing their protest in order to acknowledge Memorial Day. Of course! Who'd be crazy enough to read it differently? (Well, someone immersed in too much craziness apparently.)

I don't have terribly much to say here, except that every sane, decent, normal society - even if it vehemently disagrees on important issues - should be able to unite on the issue of mourning the dead. It's so obviously human it goes without saying (or at least it should). And there is something deeply wrong, perversely wrong, with a society wherein a substantial swath of citizens is so ideologically opposed to the State, so utterly divorced from anything or anyone not within their own "in-group", that they cannot even muster the basic humanity required to pause and honor the dead. As a resident and citizen of Israel, I'm disgusted and embarrassed that we can't even get it together for something as straightforward as Memorial Day. Yes, yes, "two Jews, three opinions" and all that - it's just part of the unique idiosyncratic nature of Am Yisrael, yadda yadda... But come on, we're talking basic common decency here!

That's the thing - it's ideology over decency, over common sense, over basic humanity. On this particular count, America puts Israel to shame.