Do You Believe in Extraterrestrial Abduction? 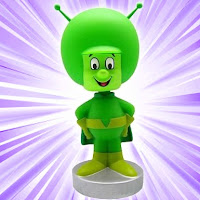 (A parent is called in to speak to the principal of a local day school...)

Thank you for coming in. I appreciate it. I have a question I need to ask you.

I don't know how else to put it, so I'm going to ask you straight out - Do you believe in extraterrestrial abduction?


Do I believe in E.T. abduction... You want the honest answer?

Ok then... Wow, I really thought I knew you.

You don't know me? I'm the same person I always was. Why does it suddenly change everything if I don't believe in E.T's?

Because you're walking around like you're one of us, and you're not. It's dishonest.

I'm not one of you? I'm living as a contributing member of the community and believe in what we're trying to accomplish. Do I have to broadcast what's going on in my head? Do you think everyone around you thinks exactly alike?

Look, it's your life. You can believe whatever you want. But there are consequences. You can't be a part of our community if you don't believe in E.T.'s.

Because this is an E.T. community, that's why. And I'm sorry for being blunt, but by saying you don't believe in the most basic tenet - that makes you a denier. It goes against everything we stand for. So now you want me to let you and your kids come in here with your heretical ideas and weaken people's belief? After all the hard work we put in creating a community of devout believers? No way. I'm afraid your kids can't go to our school anymore.

Seriously? But we love this school. I went to school here. My kids have all their friends here. You're really kicking us out?

I'm sorry. We just can't have it. This is not the community for you.

How can you say that? We've been a part of the community since I was a kid. We're so involved. We've given so much to the school. And we love it here. We love the people. We share the same values. We've never caused any harm... I just don't believe in the E.T. stuff.

What happened to you? Why don't you believe anymore?

It was a gradual process. Several years back, I started thinking about the fact that I've never actually seen an E.T., never seen a saucer. Never been abducted. Never heard any stories about E.T. involvement that couldn't be explained some other way. And I've done a lot of reading...

But how can you not believe in extraterrestrial abductions? What about all the evidence?

I've seen it, and I don't find it convincing. Besides, if there was really so much hard evidence, why isn't it just common knowledge to everyone? Why is it relegated to X-Files episodes and the like?

Because people don't want to believe it.

Could it be that they don't want to believe it because it sounds unbelievable? Even a bit foolish?

Who's being foolish here? Think for a minute. How can thousands upon thousands of people give separate testimonies about something that never happened?

I hear how that sounds like a proof, but more people probably believe they've seen ghosts and believe in the Ouija board. There's all kinds of crazy stuff out there which people believe is 100% true. And they also produce lots of "evidence". So why couldn't the same be true of extraterrestrial abductions?

First of all, because E.T.'s simply are real. The other things are not. Secondly, the evidence for alien abductions is a tradition that stretches back for millenia - ancient civilizations speak about it. Whole cities of people have watched E.T. ships light up the sky. And you never answered how people could separately report on the same phenomenon with details that match up.

You could say the same thing about near-death experiences. Or any number of supposed "paranormal" phenomena. And everyone is "wowed" by the fact that people give similar descriptions.

It's a sign that since clearly not "all" of these phenomena are true, that means you can't conclude any of them are necessarily true based on the fact of separate reporting alone. You just have to use a little common sense here.

But the details of the reporting of E.T. abductions are absolutely staggering. The chance of it happening by "coincidence" is one in trillions. Who's the one not using common sense here?

I didn't say it was a coincidence. There's obviously some other explanation. When something as remarkable as alien abduction is supposedly happening on a mass scale, and there's no conclusive proof that's obvious to everyone, obvious to science... What can I say - I'm pretty suspicious. So I'm sorry, I can't force myself believe in something I don't believe in.

It's a shame. You've obviously been influenced by skeptics. This is why we tell people not to look at any non-extraterrestral-related literature.

Why is it such a shame to expose yourself to more information?

Because it's actually misinformation, from people who don't want you to believe, people who just want to go on with their lives without being inconvenienced by the truth.

That extraterrestrials are real. The abductions are real. People aren't making it up. It's not some sort of joke.

But what difference does it make whether or not I believe it? If they're real and I don't believe it, it doesn't make them any "less" real. So what's the problem?

The problem is that the extraterrestrial beings want you to believe it. They love us, and they want humanity to do better. They want us to follow the Universal Rules.

But am I not doing what I'm supposed to be doing? Do I not follow the Universal Rules? In fact I think I'm doing a better job than most - and that includes a lot of "believers" whose kids you let go to this school. So let me ask YOU - even if the E.T.'s exist, why isn't that enough for them? Why do they care whether I believe they're here and abducting people?

You seem to be forgetting that the very first Universal Rule is that you need to believe in them.

No, I'm very much aware of that. I'm saying that I'm doing 99% of what the E.T's supposedly want. Isn't that enough?

It's a good start. But why are you even following the rules if you don't believe in E.T.'s?

Because even though I don't buy the "back story" about the Universal Rules (I think we came up with them ourselves), I think there's a great deal of wisdom in the system. I think it has a lot of intrinsic value. It has a great deal to add. And it's my community. I'm proud of it.

Ok, so tell me this - What's the "intrinsic value" of the rule of putting an alien bobble-head on the dashboard of your car? The only reason we do it is because they told us: "You shall place us on the dashboard in your coming and going."

Fair question. It's true - not all the rules make sense or are obviously connected to the goal of improving humanity. But that doesn't mean they don't have value. My kids like the bobble-heads. And they have symbolic value. When I look at it, I think about who I am and what I'm doing here.

And the green spacesuit?

Same thing. Wearing a green spacesuit reminds me that I'm a part of a community, a people.

If I found out there were no E.T.'s, and the whole abduction thing was a sham, I'd take off the spacesuit immediately. It's ridiculous - and it costs a fortune to dry clean.

Great. Take off the spacesuit if you don't like it. Or just wear the boots. I don't care. The nonexistent E.T.'s certainly don't care.

So again, WHY BOTHER?

I'll tell you why. We need to preserve some of the "ridiculous" stuff, because that's what makes us identifiable as a community. If all we did was just the "improving humanity" part, and not the ritual, we know from experience that we don't survive. We just assimilate and that's that.

Then we should assimilate, because if there are no E.T.'s, there's no point of preserving our community.

You're saying there's no point to the Universal Rules if there are no E.T.'s?

I didn't say there's no point to the Rules, but if all you want to do is improve the world, then join Greenpeace or the Salvation Army. You don't need us.

So you'd just advocate communal suicide? Would you tell the same thing to the Irish? Native Americans? They and their traditions should just go out of existence since there are no E.T.'s?

If you put us on the same plane with the Irish and Native Americans - as just another "culture", then that's pretty sad. And no, the world wouldn't end if there were one less culture. I'm sorry.

I agree the world wouldn't end. But it would be missing something. And I happen to believe in that something.

I'm sorry to tell you but you really don't believe in it.

Oh, I don't? Let me ask you: What about the Universal Rule of truthfulness? Do you believe in that?

Of course I do.

Well so do I. And how am I supposed to uphold that rule if I have to reject the truth and live with a fairy story?

It's you who are living the fairy story, my friend... I think we're done here.

What about my kids and the school?

Why don't you try the Irish school down the block.

Just to know, this was a completely made-up dialogue. None of my kids have been kicked out of school... Baruch E.T.!