Why Biblical Scholarship Is Irrelevant 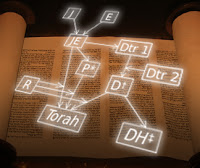 There's been quite a bit of discussion of late (see e.g. here, here, and here - update: and now here) regarding Rabbi Zev Farber and the TABS project (Torah and Biblical Scholarship). The idea of TABS is to explore how we can make two seemingly irreconcilable worlds fit together: that of belief in Torah mi-Sinai, i.e. the Divine authorship of the Five Books of Moses, and that of academic scholarship and research into the origins of the Five Books.

Now, when I say Biblical scholarship is "irrelevant", let me immediately qualify that. I don't mean irrelevant in the sense that it has no merit, nothing truthful or insightful to say. That would be absurd - it certainly does. I mean irrelevant specifically with regard to the following:

1. Divinity of the Torah

Even if all academic research and theories such as the Documentary Hypothesis were to be conclusively refuted, and we had proof beyond the shadow of a doubt that the Torah was authored by one man, and that it was none other than Moshe Rabbeinu, this still says nothing about the Divinity of the text! In other words, the leap required to say that Moshe was the author of the entire Torah is infinitesimal compared to the leap you have to make to say that Moshe communicated with a Transcendent, All-Powerful Being and dictated the conversation word-for-word. The first is at least conceivable. The second however is a contention which requires a quantum leap into the realm of "other-worldliness".

To say that God authored the Torah rests on the assumption of supernatural existences of which we have zero evidence. It requires that we assume that the reason the Torah mentions miracles and encounters with God is not that it accords with beliefs which were common in the Ancient Near East, not that every people of course wove their gods into their narratives. Rather, we have to assume that there was something special about Bronze/Iron Age times and people which called for God to reveal Himself, and now - well, the show's over.

The reason God's miracles and open communication with humans are conspicuously and entirely absent today? We're less worthy, and so God has gone into hiding. And in fact God's hiddenness is a test for us, to see if we still believe it all happened. But really God's still here (in our hearts, if we call out to Him, look for Him, etc.) - just that our free will would be robbed of us if God were to show His face, and that would ruin the whole test. That's the reason we don't see God nowadays. The possibility that the God narratives themselves were simply a product of their time, and that is the real reason there's not a single shred of any God-appearances today - no mass revelations, no pillars of fire, no seas splitting (or even puddles), no sun standing still, etc.? Why that's heresy!

Suffice it to say, you don't need the Documentary Hypothesis or any Biblical scholarship to take the Divinity out of the Torah. All you need is a little common sense - call it the "Common Sense Hypothesis".

Whether the Torah was written in bits and pieces over time and later woven together, or whether it emerged into the world as a single, holistic document, what does this have to do with the observance of mitzvot? To the traditional believer, certainly the Divine/not-Divine question should be more pressing. Meaning, if there was a Divine revelation at Sinai, what does it matter whether that revelation was recorded at different times by different people? The Torah is still "commanded" by God. And if there was no revelation, what does it matter if the Torah was written by the single author Moshe? There's still no "Divine command".

But from where I'm coming from, taking as an obvious given that the Torah is a purely human document, the question of Mosaic authorship vs. multiple authors or later authorship is totally irrelevant where it comes to Torah observance. There was no mega-supernatural-event which gave us the Torah. The commandments have no transcendent "Commander". Despite what the tradition would have us believe, the Torah has always been a covenant with ourselves. Which means we keep the Torah to the extent that we deem it as having inherent value, because we see it as being a net-positive for us, a good thing - personally, communally, and nationally. And that is a concept of Torah that no academic theory or scholarly hypothesis can touch.

So as much as I enjoy reading up on Biblical scholarship, as much as it interests me where the Torah "came from" - that's just an extracurricular curiosity. It has no nafka mina, no practical consequence for Torah and mitzvot. What interests me much, much more is the question of what the Torah is and what kind of impact its teachings and observances have on our lives. Is it making us better people? Wiser? Does it enhance our enjoyment of life? Is it helping us to survive as a people? Is it adding something positive to the world?

To me, questions like these are where the rubber really meets the road. All the back-and-forth about trying to "reconcile" Divine authorship and Biblical scholarship? Eh. To be honest, I get a bit impatient with it - both from the intellectual contortions people like R. Farber have to go through to try to make it work, and also from traditional believers who simply dismiss all Biblical scholarship out of hand due to their a priori conclusions of what the Truth has to be. I'm much happier being where I am - 100% open to and interested to hear whatever findings/theories the academic Biblical scholarship world wants to dish out, and choosing to engage in Torah and mitzvot regardless.