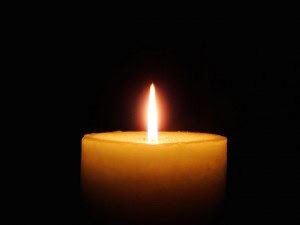 After lighting the Chanukah candles, we say:

הנרות הללו קודש הם ואין לנו רשות להשתמש בהם, אלא לראותן בלבד
"These candles are holy, and we do not have permission to use them - only to look at them."

That's how I'd like people to treat Yom Hashoah with regard to the "God" issue. Sure, if people have questions about how God could allow such a thing to happen, that's natural. It's not a question I have, but I understand it.

But to start saying on Yom Hashoah, "Because the Holocaust happened, therefore we know that God [insert ideological sentiment here]" is something I find personally distasteful.

Mind you, I'm referring to both sides of the spectrum of belief. I'm talking about the God-believers who want to use Yom Hashoah to make an ideological point about the secularization of Jews in Europe - i.e. that they "caused" the Holocaust. And I'm also referring to atheists who take Yom Hashoah as an occasion to make the point: "See, that proves God doesn't exist."

Point being - sure, you may be thinking these things. You may even believe it with every fiber of your being. But please, for one day a year, let's focus on the memories of the millions of people whose lives - and children - were ripped from them. Let's focus on the unfathomable scope of what took place, the calculated murder and torture on a scale so massive it can't be comprehended, and that it all happened practically a handful of years ago. Let's take the time to think about just how easily the human mind can be swayed, twisted beyond recognition, how supposedly "civilized" people can come to do things that are so mind-bogglingly horrific, so unspeakably cruel. Let's remember the stories of all those who showed incredible courage and humanity in Nazi death camps and work camps, in ghettos and cities, in cattle cars and on death marches through the icy cold. Let's focus on the resolve to do whatever it takes to see to it that such a thing doesn't ever happen again.

But if you're really just using the day as another opportunity to "prove your point" about God (and I suggest you meditate on that for a moment), you have 364 other days on which to do that. All I ask is that you make this one day a year "kodesh".

May those murdered in the Holocaust never be forgotten. And may we treasure life, treasure goodness and decency, so much that we're willing to fight and sacrifice to protect it. Am Yisrael Chai...