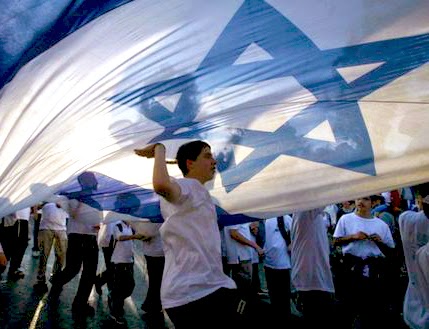 I know the title portends an anti-Zionist tirade, as if the Israeli holidays constitute some kind of "idolatry", but actually I meant it as a compliment. Let me explain.

Here's how I understand the role of God in the Torah:

In antiquity, part of what gave a people "standing" (in their own eyes and in others' eyes) is that they had a good origin myth. It had to convey a sense of growth and development, overcoming human foibles and trials - making mistakes, falling into traps, and climbing out a better person for it. The story had to teach something valuable for generations to come, give over lessons and rules deemed essential to the aspirations and character of the people.

But just to have a "story" - even a good one - about the comings and goings of mortal human beings was not enough. The myth also had to have a god, or multiple gods. When you have gods involved in the formation of your people, that means you are a people of significance. You - your culture, your values, your practices - mean something.

Or put it the opposite way - not to have a god or gods in your people's story would be completely unseemly! In a world chock full of gods, where "everyone who was anyone" had theirs, if the gods had no intervention in the lives of your forbears, if there was no divine hand in your people's origin, to put it simply - you'd be a nobody. To tell a god-free narrative just wasn't done. It wouldn't be fitting, wouldn't be dignified. It would cheapen your worth - and sense of self-worth - as a people.

Which brings us to the title - that Israeli holidays are the new "God".

Here's the State of Israel, a new nation on the international scene. Aside from setting up a governing structure, utilities, trade relations, etc., what kinds of things does a "proper" nation do? Well for one, a proper nation celebrates its independence day. A proper nation has a memorial day to mourn over and pay respect to its fallen soldiers. A proper nation commemorates events of major magnitude - both joyous and tragic.

Can you imagine a country not doing these things - not celebrating its independence, not having a memorial day, not commemorating events of massive significance? What kind of self-respecting people would you be? That's no nation!

The Israeli holidays thus function something like putting "God" into the narrative. They, as well as other trappings of a modern state, help to give the nation "standing". It's part of the national psyche/self-esteem, and it's part of living in a world of nations.

So then where does that leave the "old God", as in God?

Well, as far as the State of Israel is concerned, God is a part of "Jewish culture", and there's a place for Jewish culture to weave its way into the national culture. I'd say there's even a place for a country to express a certain "deistic" self-identity, if that's where people are at. Sentiments such as "one nation under God" can help lend an atmosphere of purpose, humility, morality and underlying spirituality. And that can be a good thing, providing it remains innocuous and non-invasive. But once a nation starts to justify itself, its policy decisions, the wars it fights, based on what it alleges to be the "will of God", not only is that undignified - it's certifiably nuts, and it has the capacity to become pretty darn scary, both for its own citizens and for the rest of the world.

To me, the ideal is a secular State with Jewish overtones - which has national holidays, and Jewish holidays, and which keeps God out of law and policy. And what we have now may be far from perfect on these counts, but it's pretty good - and I'm grateful for that!

With that, I wish everyone a meaningful Yom Hazikaron, and a happy Yom Ha'atzma'ut.