Why the "Kaplan Affair" was a good thing 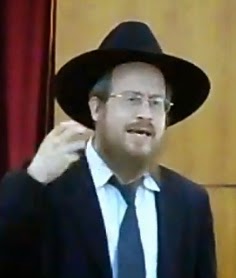 I have a basic one-off rule about lashon hara (gossip/unkind words): If you wouldn't say it in front of the person you're speaking about, then best to keep it to yourself. In other words, only speak the way you'd feel comfortable speaking if that person were there with you.

What I want to offer in this post is a similar principle: Only say things to your "in-group" that you'd feel comfortable saying to others.

The recent fiasco involving Rabbi Nissan Kaplan is a great illustration of how this principle can be arrived at - albeit unwittingly, and perhaps a bit too late. For those of you who aren't familiar with the story, R. Kaplan is a teacher at the Mir Yeshiva in Jerusalem. Last March he gave a class, recorded (much to his regret) for posterity, in which he stated:

"So why are we not doing it? Because he said, 'I don't know yet who is the general who could run the war. But if I would know who's the general, we'd go out with knives.' This is what Rav Steinman said. There's a war against religion..."

"I explained this to my kids... Then, in the middle of the meal, my kid, five years old, says, 'Abba, we don't have a sword in the house, I'm looking - maybe a hammer is also good?' I was very happy, I gave him a kiss... I was so proud of my son. He's looking for a sword to kill all these government ministers."

Quite a mouthful. It's unnerving and obscene, and - well, also fairly prosaic. When you've spent enough time in the frum community, you know that statements which are offensive, racist, sexist, arrogant, elitist and triumphalist, statements which revel in the idea of Hashem's destruction of non-Jews or non-believers, are said as a matter of routine, by leaders and laypeople alike. They're said without anyone batting an eyelash. In fact they only boost the speaker's "status" in the community - because hey, here's a person who "says it like it is" and doesn't mince words. Here's a person who doesn't "apologize" for the Torah tradition but instead takes a strong and unabashed stand, like a faithful soldier in Hashem's army should... etc., etc.

And yes, for the most part, these kinds of statements are a lot of "hot-air." Yeshiva students don't generally leave classes like the one given by R. Kaplan and take to the streets in violence, nor do they typically plot anyone's demise. (Yeah, tell that to Yitzchak Rabin.) No, they basically just go back to the beis midrash like normal and carry on with the business of learning. And any teacher at the Mir would be horrified if one or more students were to do otherwise and actually "act" on his words.

That's the blessing and curse of "charedism" - lack of concrete action. It's a mindset which says: We aren't "big" enough (spiritually) to make changes to the system, even when such changes are arguably logical and necessary, and we also aren't "big" enough to do things like slaughter Amalek in the form of Israeli government officials. No, we have to wait for Moshiach to come and tell us all what to do... Which basically means existing in a perpetual state of suspended animation. Like I say, it's either a blessing or a curse, depending on the issue.

But just because yeshiva bocherim aren't incited to riot immediately after hearing a talk like that, doesn't mean that the words aren't seeping, one talk at a time, into their brains. It doesn't mean that it doesn't plant the seeds of violence. Clearly it does. The rioting and anti-government violence which breaks out intermittently in places like Mea Shearim and Beit Shemesh doesn't come from nothing - it's fueled by every seemingly "innocuous" hot-air statement made in yeshivas and shuls, and said offhandedly 'round the Shabbos table between spoonfuls of chullent.

Which brings me back to my original point... Even though it's totally par for the course for people like R. Kaplan to give over outlandish, belligerent, nearly psychotic ideas while safely embedded within the "in-group", they would never think of uttering these statements in other contexts. And if such words are ever leaked to the outside world, it's a cause for much embarrassment, desperate face-saving, clumsy back-stepping, and - in R. Kaplan's case - an explicit apology. Some of his words:


"I am completely against such words. They're disgusting. I regret what I said, and I am deeply sorry for using such examples. I am also sorry for hurting people’s feelings, and I hope they can forgive me."

But what does such an apology mean?

Well, for starters it should be clear that R. Kaplan's apology would never have been issued if he hadn't been taken to task, if his words didn't go public. There's no question that he desperately needed to cover his - and the Mir Yeshiva's - "behind" here. I take him at his word though that he sincerely regrets having caused people upset and alarm as a result of his talk. That's a pretty "pareve" thing to say: "I'm sorry if what I said hurt you." Then the question comes whether his apology means that he's actually changed his mind and now disavows the beliefs themselves, the same beliefs he's been espousing for years and which are standard fare within his in-group. Some excuse his statements as "hyperbole", an exaggeration, which people have done the mistake of taking literally. But how is making it sound like it's a mitzvah to kill Israeli ministers a "hyperbolic" way of saying that it's in fact an "aveira"? A mitzvah isn't an "exaggeration" of an aveira! So what does he believe in fact?

Honestly, I'm not so concerned with that question. To me, the question of R. Kaplan's "true beliefs" is far less important than whether ideas like this will continue to be spoken and heard - whether they'll stay in circulation. Because when you take an idea out of verbal circulation, you in fact help to curtail that belief.

I'd like to think that people would remove ideas like R. Kaplan's from circulation because they're loathsome. However in reality, it happens not "lishma" (for the right reasons) but instead out of fear of transparency, concerns about the backlash that will occur when you can't keep the "in-group" and "out-group" hermetically compartmentalized from one another.

In essence, Rabbi Kaplan, via the fiasco he brought upon himself, backed into the principle: Don't say to your "in-group" what you wouldn't want others to hear.

It's a principle that works to take extremist ideas out of circulation. How so? Because people start to talk much more reasonably, sensibly, and moderately, once they're aware they may be speaking to a wider audience.

Which is why the "Kaplan Affair", as disturbing as it was, is really a good thing - because it further plants into frum people's minds that what they say is increasingly vulnerable to exposure to the "out-group". With transparency (i.e. mobile/internet communications, videos, etc.) ever on the increase, you never know when your words will come back to haunt you.

That kind of fear is pretty useful, I would contend, because it helps to rein in some of the "crazy". And hopefully, over time, that will work to generate a little more sanity.