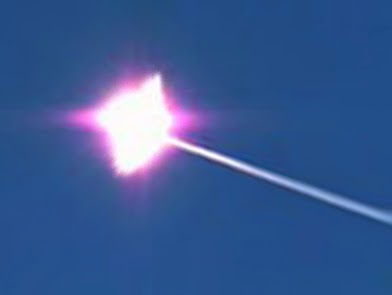 I was driving at dusk last night when I saw a small, white-yellow light in the sky in front of me, off in the distance among the strips of darkened orange clouds that formed an otherwise lovely, innocuous sunset. I squinted, wondering if maybe it was just a glare in my windshield, my eyes playing tricks on me. But in the space of one or two seconds, I saw another light - this one traveling at high speed at a diagonal upward, toward the light in the cloud. That was followed half a second later by another fast-moving light traveling in the same direction. The first one then kissed the light I'd seen in the cloud, and in a flash, both were gone. A split second later, the second one also flashed and faded.

As soon as I saw the first light fire upward, it was entirely clear to me what I was looking at: Israel's "Iron Dome" defense system, knocking out a missile lobbed into Israel by Hamas.

It was an amazing sight - like something out of a dream. It was quiet, no sound (at least none that was audible from inside my car). I simply saw what has been in the news unfold in front of my own eyes. I saw actual war for the very first time. This wasn't on television - it was live, occurring close enough to me (and/or high enough) that I could see it through the windshield of my car.

This week and last, on several occasions, we heard the ominous wail of the air raid siren. I ushered my family into our "safe room," where we'd sit for ten minutes, chat, and come out wondering what (if anything) happened. But to actually see a live projectile of war, and to watch it explode in the distance - that was something new for me.

And what was chilling was that what I had seen in the sky was not merely some impersonal instrument of war. No, it dawned on me that in fact it was very personal indeed - this missile was actually intended to murder me.

I say "me" because if the missile had struck my car and killed me, Hamas would have taken that as a "successful hit." So in a sense, I was the target of that missile. And I say "murder" because I am a civilian, a noncombatant. To go out of one's way to specifically target a random civilian for death is to attempt to commit murder, and to do so as part of one's political strategy is terrorism.

(As I write these words, the "Red Alert" app on my phone just sounded, as sirens are going off in the Eshkol region, which is in the north-western Negev, adjacent to Gaza. So another attempted murder is taking place now, literally as I speak.)

Without getting into a whole political diatribe, I do want to say two things I've been thinking about in relation to recent events here in Israel.

One can debate whether Israel's response has been heavy-handed, not careful enough about preventing innocent civilian deaths. The question of how vigorously to go after Hamas operatives, militants and weapons caches if you know you're bound to kill innocent people is a very difficult moral and strategic question, one which Israel clearly struggles with. Has Israel taken the right steps in this regard? Can it still claim the moral high ground? I don't have an answer to that. This is very murky territory here.

But if there's one thing that is perfectly clear, without any room for doubt whatsoever, it is that Hamas absolutely does intentionally target civilians. It explicitly, proudly deems the deaths of Israeli civilians to be a great success, a cause for celebration. In fact, the deliberate killing of Israeli civilians (i.e. murder and terror) is its whole modus operandi. The only reason it hasn't been better at this is due to its inferior firepower, lack of expertise, and of course Israel's defenses (including Iron Dome), intelligence work, and efforts to strike at Hamas' military infrastructure. But if Hamas had the technological capacity to kill mass numbers of Israelis, do you think it would hesitate for a single moment in doing so? Of course not - we are talking about people who are ready and willing to martyr themselves in order to kill Jews/Israelis, for goodness sake!

Another thing is clear: Israel would not be bombing Gaza right now if Hamas did not rain missiles on Israeli towns for weeks on end, and if it were not continuing to do so right now. This is not a "cycle of violence." It is a cycle of attempted murder and the attempt to stop the would-be murderers. It's a cycle of terror and the attempt to stop terror.

One person's terrorist is not another person's "freedom fighter". One who fights for freedom by targeting random innocent civilians is a terrorist, period.

And this brings me to my second point.

2) Over the past week or so, I've heard friends and neighbors of mine, religious Jews, otherwise decent people, propose that what Israel really needs to do is to "flatten" Gaza, "carpet bomb" it, "raze it to the ground."

I challenged one such person, saying that what they're suggesting sounds a lot to me like terrorism and murder, if not outright genocide (not to be confused with hyperbolic accusations of "genocide" being leveled at Israel now by some deeply confused people, including Palestinian Authority head Mahmoud Abbas). This person went on to justify his suggestion on the basis that this is precisely what Hashem told Bnei Yisrael to do to Midian - to kill every man, woman and child (excluding female virgins). I responded that we don't live in such a world anymore, and that now a moral person needs to look out for innocent life. To my consternation, we actually had to agree to disagree on this point.

Following this conversation, I had it in mind to write a post linking fundamentalist belief with calls for genocide. But then over Shabbat I heard another friend quote a secular Russian-Israeli he knew, who likewise proposed that we should "flatten" Gaza. And I realized that this isn't just a "God" issue. Both religious and secular people talk this way - just that the former "dress it up" with God-talk and verses from Tanach. What is the issue then?

I think it's simply what many people do when faced with what appears to be an impossible problem - they want to make it "go away" - eradicate it. And in the case of Gaza, the way to do that is to look at the place as one big den of terror, a simmering "chullent" of hate and would-be killers. That way, the countless innocent civilians - families, old people, children, people just living their lives - are batel (nullified, cancelled out) in the chullent. Their "taste" is no longer discernible in the pot. Meaning, when the sensitivity to individual human life is blunted, rationalized away, willfully overlooked, it doesn't affect a person's conscience... Another chilling realization.

Yes, I agree that we're talking about a very real problem with no great solutions in sight. I also understand that "war is hell," and that during times of war, a certain level of harm to innocent civilians is tragically going to be incurred. But no serious person (even among right-wingers) in the Israeli government, no leader in the IDF, would ever propose as a realistic option that we should "raze" Gaza - i.e. kill 1.6 million human beings! Because that is completely psychotic.

Yet you hear otherwise "normal" people say it without batting an eyelash. Talk about not being able to "claim the moral high ground" - we're talking here about something so incalculably, stupefyingly, spectacularly immoral that it nearly defies comprehension. All I can say is thank God these people are not in leadership positions. Or... Maybe they are. Maybe our leaders do "think" these things. Maybe they even "wish" for these things. But they wouldn't dare "propose" such an idea publicly.

So perhaps that's what it is - a whim of fantasy. It's human nature to want to "zap" your enemies away, like saying: "Imagine a world with no Iran, no North Korea, no Islamic fundamentalism..."

But when you start to get into statements like, "Here's what I think we should do..." Is that really a "fantasy" we ought to indulge? Is switching off human compassion something we should ever possibly tolerate, much less in "polite conversation" amongst friends, much less in a supposedly "religious" Jewish community? Of course we need to protect ourselves first and foremost. But we cannot, must never, cease caring about innocent human lives. If we lose that, we truly lose ourselves. We lose everything the Jewish nation stands for - or at least what it "ought" to stand for.

So I go back to what I said earlier about it being an act of "murder" to specifically target civilian noncombatants. Not only do I believe we need to be abundantly clear about this point, shout it out from the hilltops, but to me this may actually be our one hope for peace, the one common ground Israelis and Palestinians (at least the sane ones) can stand together on.

This has to be our mutual commitment, to say that:

As obvious as such principles ought to be, I realize that such a "mutual commitment" is arguably a long way off. But if we want to give our children, or at least our children's children, the slightest chance at a bright and peaceful future here in Israel, these are principles we had better start rallying around - and soon.