Knock knock. Who's there? Hashem! 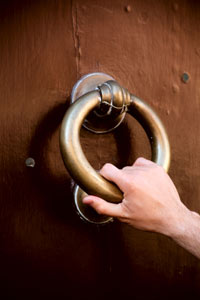 I was at a "vort" (engagement party) this week, and one of the speakers suggested that the way to ensure a healthy and happy marriage is to "let Hashem into your home". At this point my wife and I looked over at each other and smiled. Neither of us is much into God-talk. And while Hashem may be "in our house" by virtue of the fact that we have a Torah home, and we're both kindhearted, ethical people, God rarely if ever enters into the conversation (except sometimes to point out the God-motivated craziness that goes on in the frum world), and neither of us does what we do out of a sense of reward and punishment or Divine scrutiny. We both simply see the value in being observant. So thank God we're basically on the same page! Because I know of situations where that's not the case, and it can be a terrible strain on the marriage. Baruch Hashem, we have a happy and healthy marriage - and without "letting Hashem in" per se.

That said, I understand what the guy was saying in his speech. If you let Hashem into your home, meaning you are living with an awareness of God's will, expectations, presence, and ever-watchful eye, this has some "potential" benefits:
Now I'm not naive. Certainly being "Hashem-minded" is no guarantee whatsoever of a happy home, or for that matter of any of the three benefits above. (In fact there are many ways that a religious mindset can be downright damaging psychologically and interpersonally in the home, but I don't want to get into that here.) But I do think it's fair to say that to the extent "Hashem" helps give people a common goal and gives the impetus to be "ba'alei middot" (people of more refined character), that's a good thing.

It happens to be that my wife and I find Hashem to be superfluous in this regard. The most critical part of being observant, as far as we're concerned, is treating one another respectfully, kindly, conducting oneself honestly, with integrity, and doing what we can to improve people's lives. You want to use Hashem talk? Ok, use Hashem talk. But the important thing is to walk the walk. I always maintain that I'd much rather have a neighbor who believes in fairy tales and is a gem of a person than a neighbor who's a rationalist purist but acts like a jerk. Hands down.

And come to think of it, that's probably part of the reason I like living in a frum community, even if the Hashem talk drives me bonkers sometimes. We live among so many fantastic families - true gems! That's the "ikar", the main factor in quality of life. Not believing in fairy tales - sure, that's also important, but in a sense I see that as arguably more of a "mehadrin" position.