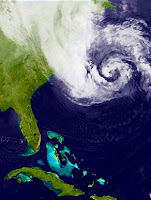 First off, I want to say that my heart goes out to those people who have suffered as a result of Hurricane Sandy. I'd like to make two points, one brief and the next I'll try to keep as brief as I can.

1. Thank God more people weren't killed. And when I say "thank God", I mean thank the fact that we live in the 21st Century, with the infrastructure and communications that enable us to prepare for and weather storms of this magnitude. And thank human beings for actually devising and building the technology that makes this 21st Century reality possible. Because given the immense destructive power of this storm, the loss of life could have been much, much worse - and it would have, had the same storm hit 100 years ago.

I say this because this thought did occur to me, and also to illustrate how a non-believer can say "thank God." It's essentially a way of expressing gratitude in cases where there's no one "person" or "factor" to whom to direct it. "Thank God" is an expression of general thankfulness. It doesn't have to mean anything more than that. And to those who reply that it's disingenuous, I'd say that a true and from-the-heart expression of gratitude, however you express it, is far more genuine than a "thank God" or "baruch Hashem" which is said as a perfunctory religious statement with no real emotion behind it.

2. I can't say that I was surprised, more pained and embarrassed, by this video making the rounds where a certain Rabbi Leiter blames hurricane Sandy on gay marriage. The sad thing is that the charedi establishment is not even at the level of Pat Robertson, who at least had the good sense to keep quiet this time around! Though I have to say, I find this rabbi's words far less frightening than I do the kind of virulent hate that gets spewed out in YouTube comment sections, in this case calling for Jews to be killed, thrown out of the country, etc. For all you kiddies out there... Yes, there really are monsters in the world.

But on the brighter side, I was very much  heartened by this article by R. Shmuley Boteach wherein he lambasts the presumptuousness of religious people who assert that such-and-such disaster happened "because" of such-and-such wrong behavior on the part of the victims, as a form of Divine retribution. (Yes, he has a book coming out on the subject that he's also promoting, and yes he's currently making a run for Congress, but I'm not so cynical that I can't appreciate the article for its content!). Let me pull out a few choice quotes, starting from the top:


"What was G-d thinking when he sent Hurricane Sandy and what could have been its purpose? In truth, I don't much care..."

Beautiful! Now, personally I would say that the question is a non-starter, because I wouldn't assume that God sent Hurricane Sandy in the first place. But... If you're going to take the common religious position that everything happens in the world because God wills it, then this is a MUCH healthier attitude. Yes, God did it, and must have had some reason in mind, but I don't know what it is and frankly I don't care... Much, much better. He continues from there:


"...because our role as humans is not to understand G-d's plan in the face of horror and tragedy, but to challenge God and demand that human life always be protected and preserved."

Again, I wouldn't presume any plan on the part of God, no less "demand" anything from God. But for believing folks, it is MUCH healthier to get angry at God for not doing a better job protecting us than it is to rationalize or as he says "divine the mind of God" in the face of tragedy. It's better for the same reason that Iyov's position (bitterly claiming Divine injustice) is preferable to that of his visitors (self-righteously claiming Divine justice). It's better because at least it's not constructing an absurd reality whereby anyone who suffers is being somehow punished for their sins. Ok, next quote:


"I have grown weary of those who say that suffering is somehow redemptive, that it carries with it a positive outcome. I do not deny that this is at times so. Those who suffer can sometimes emerge humbler, wiser, gentler. But let’s get real. There is nothing beneficial that comes from suffering that could have not been achieved far more effectively through a positive means."

Too true! Even for those who suggest that suffering makes us better people, I agree that it's time to stop romanticizing suffering. We don't need it, and we don't want it. (And I have a feeling this is what his new book title "Fed-Up Man of Faith" is hinting at, a bit of a jab at Soloveitchik's "Lonely Man of Faith", getting away from the idea of romanticized suffering and existential/theological angst as a part of religious life. As he goes on to say:


"It is time we human beings agreed to wage an all out war on suffering so that it is never excused as something blessed again."

Yes - thank you for saying that! Because we do need to make meaning out of our suffering. And one of the best, most constructive ways to do that is to take one's suffering as an occasion to try to REDUCE the suffering in the world. THAT is fantastically meaningful - and not just to oneself but to others, in a very real and concrete way.

So would I have written this article differently? For sure. Aren't the points I picked out from the article ones that should simply be obvious, self-evident? For sure. But for a traditional, God-believing religious Jew to say this I think is a beautiful step forward.