Why I Don't Care whether the Torah Is Factually True: Part II - Morality and Midrash 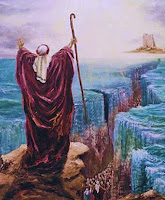 In my previous post, I suggested an approach to Torah that doesn't require making any assertions about historical events in the ancient world (e.g. the giving of the Torah at Sinai, or even the historicity of Moses). Even if none of it "happened", it shouldn't have any impact on our involvement in Torah. Why? Because in this approach, we look at Torah as a declaration about how we view ourselves as a nation and what kind of people we choose to be, commit ourselves to be. And so we stay involved in Torah and mitzvot because we view them as having intrinsic value.

Now I'd like to focus on two examples where a "declarative" approach comes in rather handy - morality and midrash. I've also inserted a bit of preemptive Q & A (which I certainly invite you to challenge and/or add to).

As I said last time, there are other truths besides "historical/factual truth" that we ought to be concerned with and strive for. One of those is "moral truth".

Now let me clarify - when I say "moral truth", I don't mean in the sense of there being any absolute moral truth "out there". I wouldn't for instance assert that "murder is wrong" or "rape is wrong" in the sense of believing that these moral laws are somehow etched into the universe. Nor am I a relativist who believes that just because there's nowhere I can point to and say about morality, "See, there it is," that I can't make the statement that "murder is wrong".

I would say as follows: All the talk of "moral absolutism" and "moral relativism" can simply be bypassed if we stop using "assertive" language to talk about morality, and instead simply start using "declarative" language. Murder and rape are wrong because we as a society declare them to be wrong. Period.

Q: Doesn't that mean the designation as "wrong" is arbitrary? A: Not at all. We have plenty of grounds for making this declaration, since it overwhelmingly reflects our experience as human beings, and certainly society would crumble if we didn't make this declaration.

Q: But how is that considered a "truth"? A: In the sense of it being "true to" the human experience, true to our higher sensibility that suffering is something we find to be abhorrent to us and which we will go to great lengths to try to prevent.

Q: That may work with murder and rape, but what about cases where there's less unanimous agreement? A: The idea of "declaration" as a substitute for "assertion" doesn't take away the complexity of issues or the fact of differences of opinion. What it does is 1) provide a more honest presentation (rather than having to make claims about "divine" morality), and 2) it softens the "bite" of differences, since after all it's harder to kill someone over a "declaration" than it is an absolute, God-given reality.

To bring another example where the idea of "declaration" might serve us well, let's talk about "Oral Torah", and Midrash in particular. On the one side you have people who take the Midrash to be "literally true" in the sense of describing "facts", actual events, e.g., if you don't think Moshe was 10 cubits tall as described in the Midrash then you're some sort of heretic. And on the other side you have people who ridicule the Midrash for being obviously "false", not only in the sense of not portraying real "events", but for often being totally inauthentic to the words of the Torah text.

But again, both of these positions are based on an assertive orientation to Midrash. I would recommend instead that we approach Midrash as being declarative. That is, Midrash is a statement which says: "I choose to look at the Torah through the lens of such-and-such teaching". It's not making any "fact-claims" - just emphasizing what we feel is important. So don't venerate Midrash for being something it's not, and don't judge it for being something it's not either! That would be my take.

Another way to put it is in terms of "meaning". There are two ways to look at meaning. One is "meaning of", a synonym for "explanation". This is the assertive usage. For instance, if someone argues that the text "means" such-and-such, we can debate whether that meaning is right or wrong. The second way to look at meaning is in the sense of deriving "meaning from", as in providing personal "significance". That's the declarative usage. When someone says that they find an interpretation "meaningful", that's not a question of "right" or "wrong". It just is meaningful to that person. What I'm saying about Midrash is that it's a mistake to think of it as explaining the meaning of the text. Rather, it's a tool to derive significance, meaningfulness, from the text, by attaching a desired teaching/interpretation to it. Or if you will, it's a way of making the text into a mnemonic device for reinforcing our values.

This last part is important. Because the pshat of Torah, what Torah "is", doesn't always match up with something that we'd want to declare our commitment to! And so we have Midrash (and in the wider sense "drash") to help make Torah work for us. Because despite what the Torah says, at the end of the day WE declare what we believe, what values we hold, what's relevant to us. And if we see something in Torah which turns us off, which runs counter to what we believe, we can and must interpret it in a way that resonates with our conscience. (Either that or just repudiate it altogether.)

Q: But isn't this disingenuous to the Torah? A: No, this kind of drash is not disingenuous because it never asserts to explain the "meaning of" the Torah text. Rather, it is knowingly interpreting the text in a way that attaches meaning to the text. (It's an "asmachta" - see this post about Midrash.)

Q: Doesn't this approach essentially render Torah meaningless? A: No, it doesn't, first off because we never depart from Torah. Even if we're disagreeing with it, we're still interacting with it, stimulated by it. Secondly, it's not meaningless because there is always a "critical mass" of Torah that we naturally resonate with, either in the pshat itself or in classical Midrash. In other words, if we completely darshened away the meaning of the entire Torah because it didn't fit with our sensibilities, that would probably be time to get ourselves another text. But that is very far from being the case!

What's more, there's a great deal of precedent for creating interpretations which suit us. How do you suppose the Midrash came to be in the first place? How is it that all kinds of Halachot are darshened into the text (and very differently by various Tanaim and Amoraim)? These aren't "built-in" features of the text - it's ALL asmachata! It's all human-driven interpretation. Torah Sheb'al Peh is one big declaration of how we choose to perceive Torah - and it's one which is meant to evolve over time.

What all this points to is an orientation that sees Torah as a choice. Even a "command" is a choice to feel commanded, compelled, regarding those things to which we ascribe importance and value. It's our choice to declare our identity as Jews, as a people connected to and nourished by the Torah. And what's more, it's up to us to declare what exactly that Torah is. Our job is to look at Torah, figure out what's nourishment for us and what's poison (sam chaim vs. sam mavet), and then - as the Torah itself instructs us - "choose life".

Does any of this depend on the Sea splitting? Does it depend on pillars of fire or talking donkeys or even a talking "Hashem"?

Sure, the "believing bunch" derives meaning and relevance from Torah by saying it's all from God, all factually/historically true - so therefore it's obviously relevant, no matter what it says. What I'm suggesting is replacing the authority-driven approach to meaningfulness, with a content-driven approach. It's the content of Torah which is worth perpetuating, irrespective of how or when (or at what stages) we got the Torah. And how do we ensure that it's worth perpetuating? By continuing to refine, reinterpret and mold the content of Torah so that it aligns with our highest ideals and sensibilities.

No, it's not a free-for-all. It's not about overnight revolutions. But it is ultimately in our hands.