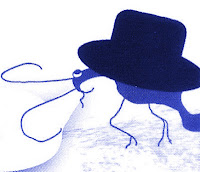 The anti-army, anti-State-of-Israel wing of the Charedi community has once again outdone itself, creating this lovely little comic leaflet which it has littered the streets with, coining a new term for Charedim who join the army: "Chardakim". They call it an acronym for "Charedim Kalei Da'at" (weak-minded Charedim), but really it's a play on the word "chaydakim" which means bacteria/germs. (You can see a few strange bug-like creatures in the comic which attest to this. Of course they'd have no clue that microbes look nothing like bugs!) Basically, the point being made here is that Charedim who join the army are "idiots" who do the "evil" government's bidding, and what's worse: they're coming after little kids. The term "chardakim" depicts them as "germs," a disease, something to "cleanse" the neighborhood of.

This is the message they're hammering into the heads of impressionable kids. It's like I said in a previous post, living in "la-la land" and believing in crazy stuff might work at the Shabbos table, but those crazy-chickens eventually come home to roost, sometimes in the form of insidious propaganda like this, which pumps hysteria and hatred into the next generation of charedi kids.

Anyway, I'm going to let this flyer speak for itself (see translation below):


"For the sake of our future!!! For the sake of our children!!!...
We guard cleanliness !!!
THIS AREA IS CLEAN FROM 'CHARDAKIM'*
Passage of Chardakim in this area is definitely forbidden
*Chardakim = Charedim Kalei Da'at / Weak-minded charedim - See the Encyclopedia Judaica, p. 134."

(Kids running away) "Immaleh, help!" (Charedi soldier bursting through wall) "Hooray, I have it... What fun... I have a rifle..." (Other side of wall, sign reads) "State of Evil and Annihilation"   (Man, presumably Netanyahu, says) "It's on my dictate that all the army runs - I won't rest until I see all these charedim on the core curriculum of the Israeli army or at least in national service."  "Ha, ha, ha... This idiot is doing our work for us - beautiful!"

On the other side of the leaflet, it says (using images of rifles and more kids fleeing in fear): "The goal: To destroy the Charedi character. The method: Conscription of Chardakim to the IDF and national service."

There are other leaflets as well, all with similar "comical" images. One says:

(With foot stamping on/kicking charedi soldiers) "Chardakim out!" (Other side, showing charedi soldiers being roped in) "The Chardakim decided to meet their end like sheep to the slaughter." (Netanyahu and general) "Don't pressure them - give a little smile, a little money, and they'll be here on all fours." "Ha, ha, ha - these idiots are still smiling. They don't dream of what awaits them." "Come, 'sheepelach', come, it's a Charedi atmosphere." (Charedi soldiers on all fours) "Mooo... Money... Mooo".

(Child running away) "Oy, these Chardakim are getting in... They have no Olam Hazeh and no Olam Habah." (Dead charedi soldiers) "Where is the home... where are the children... where are the old friends... Shabbos... Chagim... Oy tatteh... They burned my neshamah." "I always knew that this money isn't everything, but they pressured me... money... career... success... They created this kind of mood, that I forgot to think about the result... That's it - now everything is dead."

"There were Tzedukim. There were Kara'im (Karaites). There were Shabatai'im (Shabbatai Tzvi followers). There were Frankistim (followers of Ya'akov Frank - another false messiah). There are Maskilim (enlightened secularists). There are Reformim. There are Zionists. There are Mizrachistim (not even sure what that is - some slight on the knit-kippa community I suspect). And there are also... CHARDAKIM ! Changing identity in the army and in national service." (image of black hat with a bug underneath it) "Enough! I'm already sick of carrying the burden of this black hat. I'm not ready to wait until age 22 in order to be free from it. We have to find a way from age 16. This is already intolerable. If the rabbis don't let the Chardakim advance Charedi society from within, we have to find rabbis to our liking and push our way to the front with them."

(On the other side...) "Another solution from the Chardakim factory: 'We're losing out on Parnasah'." (Image of a Charedi demonstration with the following signs) "Chardak - leave our camp." "Separate from me - don't trample our children." "Go fight Amalek - Chardakim out!" "The Torah states: Separate from a bad dwelling and do not associate with an evil person - the Chardakim are trampling us!" (Charedi soldier jumping from charedi demonstration into flames) "Hooray! What fun... Also action... and also parnasah..."

There's more - honestly it's just too nauseating to keep going. I think you get the idea. It seems they plan to hold a demonstration today. I won't translate that flyer except for this one ditty: "We won't sell our children to snoring hyraxes and gluttonous rabbits and pigs."

Do hyraxes "snore"? Not sure (you'll have to ask R. Slifkin), but one thing's for sure - we can't afford to snore. The crazy beliefs and cartoonish depictions of bugs in hats all seem laughable - but these people are deadly serious, and new generations of children are being raised on blind hatred, with no ability to discern for themselves. I'm just glad it's the "Chardakim" who are carrying the rifles - and not them!