Rain in the Sukkah - Cranky Masters and Bad Omens 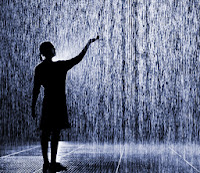 This past Shabbat here in Israel (chol hamoed Sukkot) we had a few good downpours of rain, causing us to scramble to get mattresses and the like out of the sukkah before they got soaked. The next day, I spoke to a friend about it, who lamented, "Hashem doesn't want us - He just poured a drink in our face." He was referring to a Mishna in Sukkah (28b) which says that if it rains on Sukkot and we have to leave our sukkahs, it's like when a servant comes to pour his master a drink, and the master - unhappy with the servant - pours the pitcher in the servant's face.

I responded to my friend that I wasn't terribly impressed with the middot of this "master". You're not happy with the service, so you pour the drink in the servant's face? If that's not obnoxious behavior, I'm not sure what is!

At any rate, it's a far cry from the "perfectly good", "perfectly kind" picture of God which people tend to paint today. Seems to me that in the days of yesteryear, at least as recently as the times of the Mishna, it was okay to have a God who gets cranky and ornery at times, who's a bit more "human".

And honestly I'm not sure which choice I prefer - (A) a God who on occasion can be a bit obnoxious but who's more human, more real, or (B) a God who's "only good" but represents a kind of far-removed notion of philosophical perfection which no one can ever hope to attain. My sense is that option (B) is what gets people to believe in ideas such as Chazal could never be wrong, that every Torah luminary who ever lived was a perfect tzaddik, etc. It's living in fantasyland, it's historical revisionism, and it borders on people-worship. On the other hand, I suppose I wouldn't want people walking around in the mindset of option (A) either, pouring water in each other's faces (or far worse) and justifying it as "emulating God".

Of course, I don't go for (A) or (B). I don't have a "Master". I do the work because I want to, and if anyone ever threw water in my face, I'd seek employment elsewhere!

One more quick thought and I have to get ready for the chag...

I recall one Shmini Atzeret a few years back when the first rain of the season fell mamash right after Musaf, right after the prayer for rain. And I remember how elated everyone was, the feeling that this was a positive omen for the Jewish people, that we must have earned Hashem's favor. After all, as soon as we ask for rain it starts coming down in buckets. So it's a great omen when it rains after Mussaf, but if it rains 24 hours earlier, on Sukkot, it's a bad omen... Even though I've seen it time and time again, it never ceases to amaze me how intelligent people can be so naive and superstitious. Just take the rain after Musaf - does anyone really suppose that every shul got rain right after Musaf? What about shuls that start davening later? What about other towns where the rain must've fallen an hour or two earlier? What about all the places which got no rain whatsoever?

I don't at all knock the joy people experience - goodness knows we need more of it! I'm not saying that we need to walk around like Mr. Spock, being so rational that we intellectualize away our feelings of positivity. But #1, for every warm and fuzzy experience produced by one superstition, there's fear and negativity produced by a different superstition. And #2, if we want to bring ourselves to a mindset of joy and confidence and positivity - then why not just choose a non-superstitious way, of which there are always plenty to choose from.

Wishing a good Shmini Atzeret/Simchat Torah to all...