Throwing off the imaginary shackles 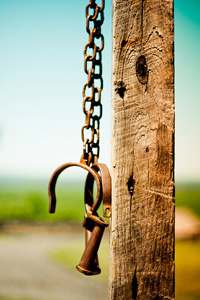 There's no actual evidence for a Creator of the Universe. But it's not totally "unreasonable" per se to speculate that some sort of mega-intelligence is behind it all. However, where it comes to believing in the God of the Torah, claiming that the Torah is literally and/or historically true, that God came down in fire on a mountaintop and dictated the Torah word for word to Moshe Rabbeinu... This not only lacks evidence - it's completely unreasonable. A person who does a bit of research into the ancient world, and thinks openly and reasonably about the Torah in its historical context, will come to the inevitable conclusion that it's a myth. Not a myth in the sense of being completely non-historical, but that things that sound like a myth (e.g., splitting the sea) are indeed myths. I speak a bit about this in my book-blog, but the point of this post (really, this blog) isn't to make that case - it's to take as the starting point the fact that there's no demanding, overseeing deity whatsoever, and to see where we go from here.

I realize that I'm stating the obvious, but I bring this up because personally, even though I've known for many years that the mitzvot have no "Commander", I still find myself occasionally obsessing about this or that point of Halacha, getting upset or anxious at "mishaps". For instance, if someone throws a hot dairy spoon into the meat sink - yikes! If it's getting close to shkiya on Friday night and I still haven't gotten into the shower - yikes! If my beautiful etrog rolls off the table onto the tile floor - yikes! If it's Pesach and the backpack I'm putting our food into turns out to have pockets full of chametz - yikes!

What I'm saying is that despite my non-theistic frame of mind, despite my wariness of superstitious beliefs and associated neurotic behavior, I still have to keep reminding myself of the mantra: It's only us who cares about any of this. Calm down, it's okay... Point being, it's one thing to know that the shackles you're wearing are imaginary. It's another to actually throw them off.

The good thing about this struggle though, is that each time I come to my senses and stop obsessing - it turns into a fantastic moment of freedom!