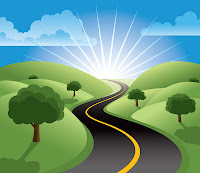 It starts off innocently enough... Just really wanting to do what Hashem wants from you, trying to get a good seat in the World to Come, ending your devar Torah with "And may we see the coming of Moshiach bimhera beyameinu". But at a certain point the "fantasyland" fun and games start to have real-life consequences.

I'm speaking in this case about many of my contemporaries who came through the ba'al teshuva yeshiva track here in Israel and are now living "charedi-lite" lifestyles. They're open, educated, working, good people, generally happy, but also "serious", affiliate with black-hat institutions and rabbis, and want to send their kids along the yeshivish path, which they perceive (and with some justification) as being the path to becoming/getting married to a talmid chacham, which of course they want for their children.

But even in ba'al teshuva yeshivas there's a sense that the "ba'al habatim" (working folks) are a sort of nebach (pathetic) class of people - they're not "zocheh" (smart enough, committed enough, spiritual enough) to be part of the elite, cream-of-the-crop class of talmidei chachamim, those who learn/teach Torah all day, but instead have to go out there and work the grindstone. But still it's a "kosher" way to go - you can be accepted in the community, and even respected/kowtowed to for the money you bring to shuls and Torah institutions.

Now where it comes to the children of these people, it's an altogether different story. Yes, Israeli charedi schools accept the fact that the parents may be working (again, how else are they supposed to get tuition money otherwise?), but the indoctrination/expectation (even in "liberal" yeshiva ketanas where they offer bagrut/matriculation testing in secular subjects) is that you don't go into the army, don't go for higher education, get no career training - but simply go on to "yeshiva gevoha" (post-high school) for an indefinite period. In other words, the default is a life of kolel. Which means these children are being supported by their parents (fully or partially) indefinitely. And what about the children of these children, who have no parental support since their parents were themselves supported? Well, it's pretty much a bare-bones existence, barely scraping by with kolel stipends, government subsidies, and whatever income the woman of the house can earn in her free time - when she's not taking care of all the kids.

What I'm trying to say here is that the "la la land" of ba'al teshuva-hood (and charedi olim-hood in general) is extremely short-sighted and naive. Yes, it "works" at the Shabbos table. It works for you. It might be able to work for your kids. But what about theirs?

And it drives me absolutely nuts to see my friends, like lemmings, just walking over that cliff one after the other, trying to send their kids to "top" yeshivas, and unwittingly condemning their future generations to poverty, not to mention "unenlightenment" - all that openness and worldliness and secular knowledge and wealth of experiences that they brought to their new-found observance just "X-ed out", erased, certainly for their grandkids - and to a lesser extent their own kids - who will be getting the charedi-brand indoctrination of Torah 24/7 their entire lives.

I'm not even going to get into the issue of community-wide army exemptions here, which to me is inexcusable and immoral. I won't even get into the "shidduch" expectations of the charedi world that wide-eyed ba'alei teshuva have no idea what insanity they're getting themselves into. I'm not getting into the fact that their kids are going to learn to ignore (or at worst hold real antipathy toward) the State of Israel, which supports them and allows them to live in "eretz Yisroel", and look down their noses at (or at worst view as the enemy) the vast majority of secular/non-charedi Jews living in Israel - their brothers and sisters in "Klal Yisroel".

Now of course there's hope. The hope is that you impart such a strong imprint on your kids as to the importance of working, supporting yourself, seeing the value of contributing to the wider society, learning something about the world, appreciating the State, and loving all Jews charedi to secular, that somehow they are able to buck the system, deflect the indoctrination, and be part of the 5% (to make up a figure) who forge their own path. (Either that or the hope is that the parents and/or kids leave Israel before it's too late.) But that's not exactly giving your kids a fighting chance - it's "relying on miracles".

And it all started with a simple belief in Hashem and longing for Moshiach. But the thing is, if you train yourself to be naive, and believe in (and I'm sorry to have to use such a dismissive word) "nonsense" on a theoretical Torah level, then you open yourself up to dangerously naive faith in the whole "system", against what should be your better common sense. And that has very real, and sometimes very unfortunate, practical consequences.

So "wake up" folks - shake off the fairy dust and high-tail it out of la-la land! Don't go the way of the lemming.