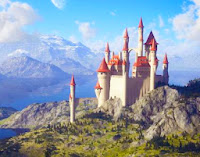 Part of the reason I haven't posted lately is that I've been doing some other writing under my real name. In fact my wife suggested to me that maybe instead of having an anonymous blog (she knows about this one), I should start a blog under my own name. I told her it's a good idea - that is, except for the "instead of" part. As much as there's a place for writing about things from the mainstream Orthodox perspective, staying within the "ground rules", I also think it's important to retain a space to express some honest thoughts about the system itself - and in particular about the question of beliefs.

I explained to my wife that I feel I have a certain duty to address the widespread phenomenon of grown adults walking around believing in fairytales. I feel this responsibility both from the standpoint of being a part of a people which presumably values truth, and also because when those fairytales are taken literally it can sometimes cause people to do stupid and even dangerous things, and to take extreme, unyielding positions on a range of issues. So occasionally I just need to drop the "A-bomb" (i.e. atheism) - as in: "You wouldn't be doing all this crazy stuff in the name of God if you just took your blinders off and realized the whole premise is made up!" Challenging the foundations of Biblical literalism, shining a light on the fatuousness of supernatural claims, and pointing out the ease at which people are prone to accept blatant superstition, brings a bit of needed perspective to the conversation, and frankly it helps me to keep my sanity.

And then I told her this, which we both had a good laugh about: "But here's the thing - I've stopped believing in the fairytales, but I still want to live in Fairyland!"

Yes, despite the fact that I don't believe the commands have a Commander, I still want to observe Shabbat, the holidays, kashrut, live with an awareness of the Shulchan Aruch. I want to wear a kippa and tzitzit, and identify outwardly as a Jew. I want to be involved in Torah learning and send my kids to schools where they can become talmidei chachamim in addition to the other things they do in their lives. I appreciate the idealistic, values-oriented, mission-driven aspects of Orthodox life. (Even if - funny enough - I disagree with some of the specific ideals, values and missions, there is a great deal I do agree with and resonate with.) I also very much appreciate the communal component of being frum. We live in a great neighborhood, and all in all life is pretty darn good.

What's more, I happen to enjoy the fairytale. It's filled with fascinating glimpses of consciousness from various times in our history as a people. Some of the lessons are timeless and deep, ones I feel proud to pass on. Others may be deeply problematic - but they too cause a person to think. And as long as you realize it's a tale, you can do just that - think, rather than blindly accept.

For sure there are aspects of Fairyland that drive me absolutely bonkers sometimes, but I'm fortunate to live in a corner of the Land where the positive far outshines the negative. There are plenty of "dark forests" in the land of make-believe, and I travel through them often, but that's not where home is. And while I'm well aware that the vast majority of my immediate neighbors believe in the fairytale too, here it feels more like a video being played in the background. It's there, but it's not what people are consumed with, swept up in, constantly acting out. The people I live around are fairly open and chilled out, and that works.

Besides, as much as I wish we could all be intellectually mature, secure and honest enough to wean ourselves off of any and all belief in fairytales, I'm not entirely convinced that Fairyland could survive without it.