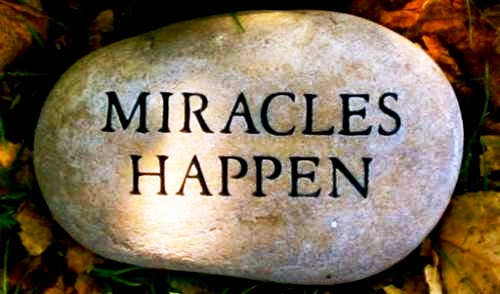 Whenever I hear miracle stories about people being healed from disease or saved from peril of one sort of another, I typically think two things: 1) How immensely happy I am that the person in question did not meet an untimely demise. 2) Would it be in bad taste if I suggested to the bearer of the good news that the explanation is no doubt far less "miraculous" than they're alleging? Generally, I err on the side of thinking it's poor taste, which is why I'm glad when I hear someone else speak up about it, or in this case "sing" about it – and especially when it's done in a rather brilliant, informative and entertaining fashion.

Tim Minchin is a comedian, musician, actor and fairly unabashed skeptic of supernatural and paranormal claims. (HT to a good friend for introducing me to his work!) In one bit, Tim talks about being approached by a fellow, "Sam", who claims that his mother was diagnosed with a visual degenerative condition that required surgery, but that she was miraculously healed after their church prayed on her behalf – this being brought as "evidence" for God. This inspired Tim to write a satirical song called "Thank You God," about his now having now “seen the light” as a result of the story.

Here's a sampling of the verses which point out the faulty thinking involved:


The story of Sam's has but a single explanation:
A surgical God who digs on magic operations
No, it couldn't be mistaken attribution of causation
Born of a coincidental temporal correlation
Exacerbated by a general lack of education
Vis-a-vis physics in Sam's parish congregation
No it couldn't be that all these pious people are liars
It couldn't be an artifact of confirmation bias
A product of groupthink,
A mass delusion,
An Emperor's New Clothes-style fear of exclusion

No, it's more likely to be an all-powerful magician
Than the misdiagnosis of the initial condition,
Or one of many cases of spontaneous remission,
Or a record-keeping glitch by the local physician

What he's saying here is as follows: People offer "miracle" as the one and only explanation, without any awareness that this may be a "mistaken attribution of causation" – i.e. misidentifying the cause and effect. After all, there are so many other possible explanations available which are vastly more reasonable, such as (to use Tim's words):

1. Coincidental temporal correlation – the fact of the prayer and the healing coinciding being simply a... coincidence. After all, think about all the millions of stories that don't get reported, either because nothing discernible happened during or soon after the prayer, or perhaps because the time of prayer actually coincided with the person’s demise rather than their recovery.

3. Potential that people are lying – that all or parts of the story are simply a fabrication.

4. Confirmation bias – the fact that people tend to favor explanations that confirm previously held beliefs, i.e. the belief that there is a God who responds to our prayers by working miracles.

5. Groupthink – that although one might cite large numbers of believers as a "proof" that something is real, all this proves is that in groups, people are unlikely to express dissent – even if an idea sounds ill-conceived. Hence the "Emperor's New Clothes-style fear of exclusion" – that people will go along with something ridiculous in order not to be excluded/derided.

6. Mass delusion – again, even though you have a large group, human psychology makes us in fact more apt to subscribe to delusional thinking when others around us believe it.

7. Misdiagnosis – perhaps the person was diagnosed incorrectly at the outset, and so the fact that they’re "healed" of a condition they never actually possessed is certainly no miracle.

8. Spontaneous remission – it's a known phenomenon that occurs on occasion. Statistically improbable? Yes. But someone has to be that "one in a million" after all. Unknown mechanism? Perhaps. But just because we don't necessarily know how something works doesn't make it a "miracle."

9. Record-keeping glitch – someone along the way may have mistakenly recorded the person as having the condition, which then became part of their health history.

Point being, any of these explanations is orders of magnitude more likely, and more logical, than attributing the healing to something "magical" or "supernatural." This is especially so when you add in other factors (which Tim alludes to in other verses), such as the existence of horrible suffering throughout the world. Somehow, children dying of hunger and disease did not merit God's intervention, despite many people's fervent prayers, and yet Sam's mother did. And to make matters worse, there really is no such thing as God not intervening. The same God who performed this rather modest "miracle" is the God who's also very much responsible (by theological implication) for incalculably profound and widespread human suffering.

Does this mean we can't be thrilled when we hear stories of recovery and tremendous good fortune? Of course not. We should be thrilled. Does it mean we should go around mocking people to their faces for not thinking things through properly? Of course not. We need to be decent and kind. But there is a place for education, to help people learn critical reasoning skills – to be able to distinguish between magic and science, fantasy and reality. And of course, there’s also a place for humor – even (or you might say especially) when it's highly irreverent!